View cart “The Chester County Automaton(s) – eBook Digital Download” has been added to your cart.

This bundle combines the print version of all three plays. as well as the digital versions in EPUB, Mobi, and PDF for one low price with flat rate priority shipping. Save $9.95!

Clearly, the end times are at hand when The First Uniform Church of Perpetual Joy and Humility discovers a local Scientist is creating an Automaton, a mechanical man. Meanwhile, the young son of the minister finds himself abandoning all reason and pursing a one-sided relationship with Mary, a severely brain damaged hospital patient incapable of communication. Complicating matters her father, the puritanical Captain Swing, has decried the whole church as sinners without the devotion to truly look into the eyes of Satan. With the power of prayer, paranoia, and a pancake breakfast, there is little doubt that this demonic scientist will soon be launched back into his dark-hold in the hoary netherworld. Of course, all of this assumes that Doctor Metternich actually is the Anti-Christ.

Set in a small hobo “jungle”, or camp, Eastbound Jungle follows a small group of hobos who have chosen a life of travel, freedom, and short term migrant work in opposition to the humdrum existence of “civilian” social obligations. This small society is forever fractured with the accidental death of one of their own. Guilt, anger, and paranoia run rampant as they deal with the repercussions from this tragedy. As their patriarchal leader seeks to preserve the peace and camaraderie of the community a manipulative parasite plays on the emotions of a traumatized man using his fear to get what she wants. As a battle of will rages for his sanity, dark revelations lead to a tragic climax. Eastbound jungle explores themes of freedom, guilt, and justice in a world set just on the outskirts of our own.

Binky and Simone have a kameah-meah super problem! If they don’t get an “A” in the science fair they’re going to end up in summer school locked away from all the other Beach Buddy Tag-alongs. What’s standing in their way? SCIENCE. Luckily Brother Bailey is here to get rid of those pesky “science standards,” but will popular moral opinion be enough to defeat the evils that lurk within mountains of proven scientific evidence? And will the mystical eastern art of karate be enough to stop those fuddy-duddy sharks from scaring away all the fun?

This bundle combines the print version of all three plays as well as the digital versions in EPUB, Mobi, and PDF for one low price with flat rate priority shipping. Save $9.95!

as well as the digital versions in EPUB, Mobi, and PDF for one low price with flat rate priority shipping.

There are no reviews yet. 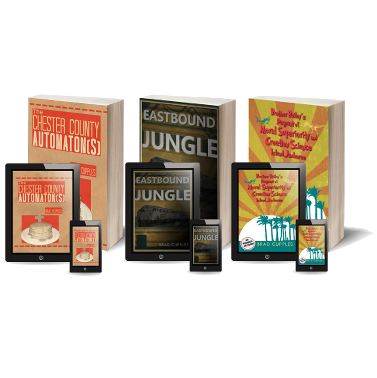